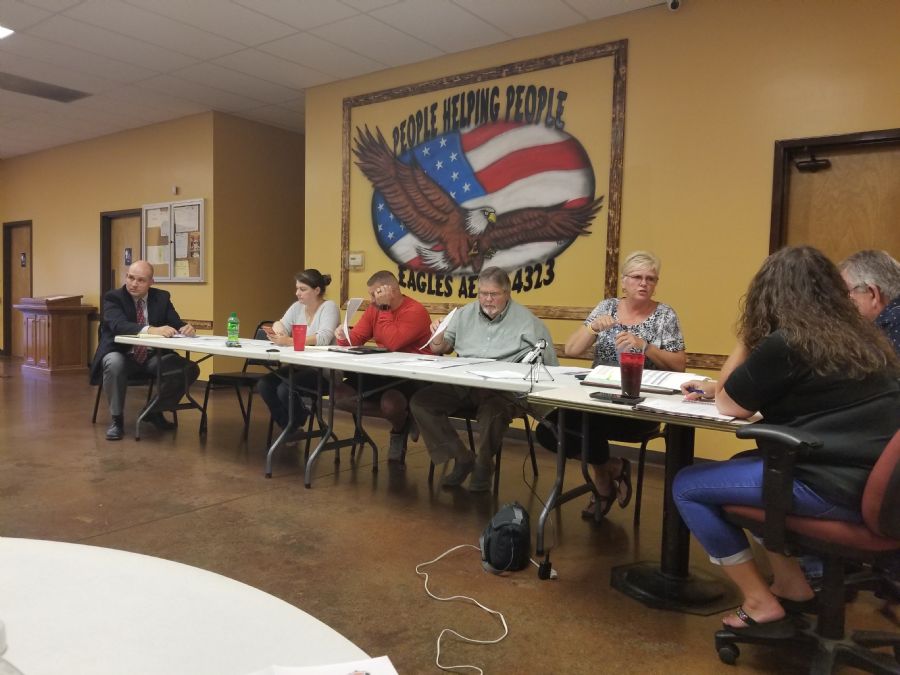 There was a public Town Meeting held on September 19th 2019 at the Lapel Eagles from 7pm.

Herschel Hinkle wanted to thank the Town for putting up the new street signs.

He also asked the Town for help taking down flags and putting up wreaths and lights on the light poles on Main Street in November.

Deb Wainscott thought it wouldn't be a problem.

The Town Council voted to approve the 2020 budget. All members present voted yes except for Tom Marvel who abstained.

Work is still ongoing to figure out how much it will cost to repair 650 S after it was damaged due to detour traffic using it earlier in the year.

The Town is to get an estimate and be reimbursed for the repair work by INDOT.

There were some concerns as to exactly how much money INDOT would reimburse the Town.

The Town Council approved a proposal by Regal Computer Services to develop a Time Keeping / Attendance system to be used at the Utility Building by workers and at Town Hall by office staff at a cost of $800.

The Town Council discussed the $9,000 a year rental fees for hydrant use the Town of Lapel charges the fire department.

Dennis Molina suggested "doing away with it".

The Town Council agreed and with the exception of Tom Marvel who abstained voted YES to scrapping the fee.

There will be a special meeting / public hearing on September 26th from 6:30pm at the Eagles to discuss the OCRA grant.

The near two year brown water issue investigation has now switched from a localized problem to a problem with the way the water plant is running after several engineers and the original manufacturer of the water plant have both informed the Town of Lapel that the plant is more than capable to handle the iron coming from the SR13 well.

The new plan is for the Town of Lapel to have someone from the company that built the plant come out and train Town employees on how to run the water plant and hopefully eliminate the problem.

Paul Schwinghammer owner of Hallmark Homes announced that the investor behind the Montgomery Farms addition has sold all the remaining lots of section 3 (12 lots remaining) and section 4 (22 lots undeveloped) to another builder effectively cutting Hallmark Homes out of the development. They have two homes to finish and sell but after that they will no longer be involved in the Montgomery Farms addition.

He stated that Arbor Homes the new builder typically makes homes in the $200,000 to $250,000 price range and may be considered more of an entry level home.

Several residents present at the meeting that live in that neighborhood were concerned at the effect this might have on their property values.

Schwinghammer offered to pay the investor more money for the lots but said their offer was rejected and wanted the facts to be known before people started jumping to conclusions.